There are two types of specific immune cells:

It is a famous experiment on the chicken where they took three groups of chicken:

The following experiment elaborates the origin of B and T lymphocytes: 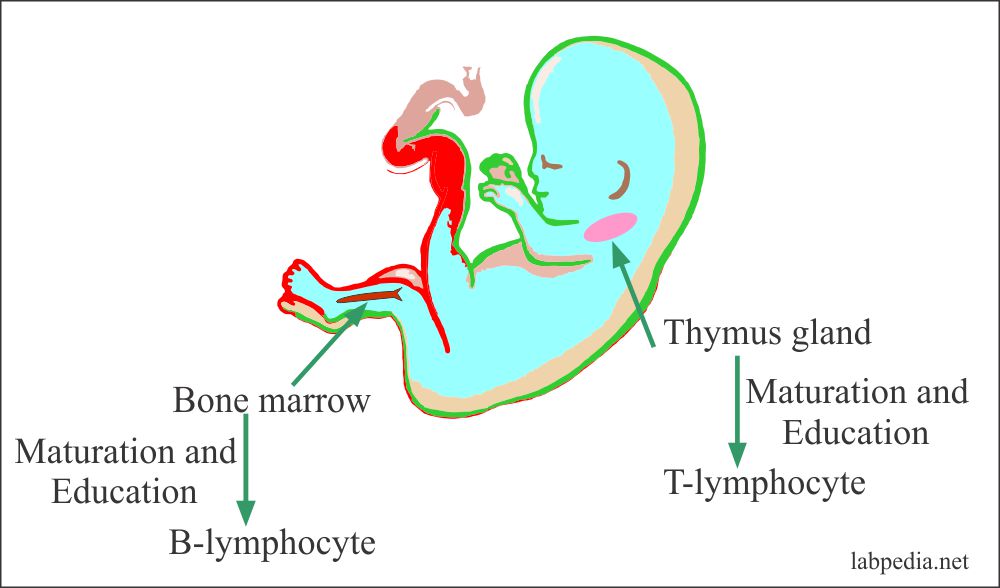 In Fetus B and T- Lymphocytes development

Development of B-L and T-L:

B-L and T-L develop from the stem cells in the bone marrow. These cells are matured in the thymus gland and the bone marrow. Now they will have different functions according to their site of maturation.

The stem cell is the mother cells for the formation of B-L and the T-L. Then these cells differentiate into different functional cells. 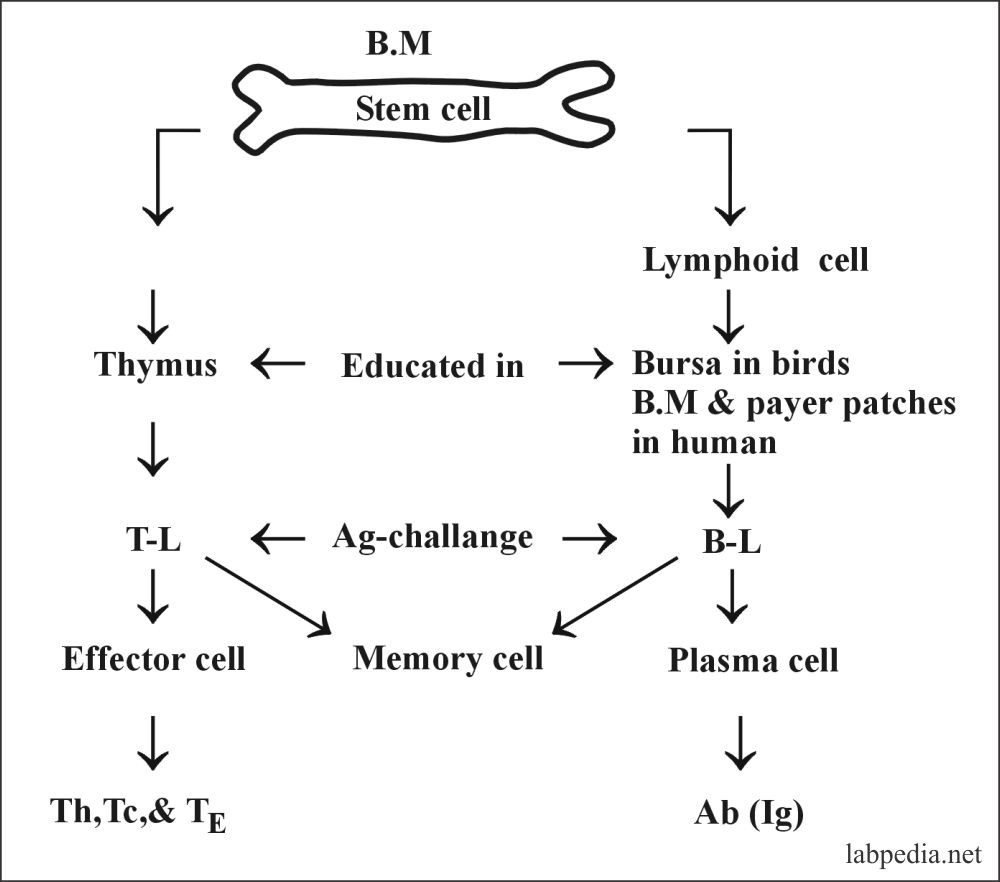 Fig 44: Development of B and T lymphocytes

T- lymphocytes give cell-mediated immunity, and this will be effective against:

B-lymphocytes are associated with humoral immunity and effective against:

It is 5-7 days, and memory cells live for several years.

Site of Formation of the B-lymphocytes 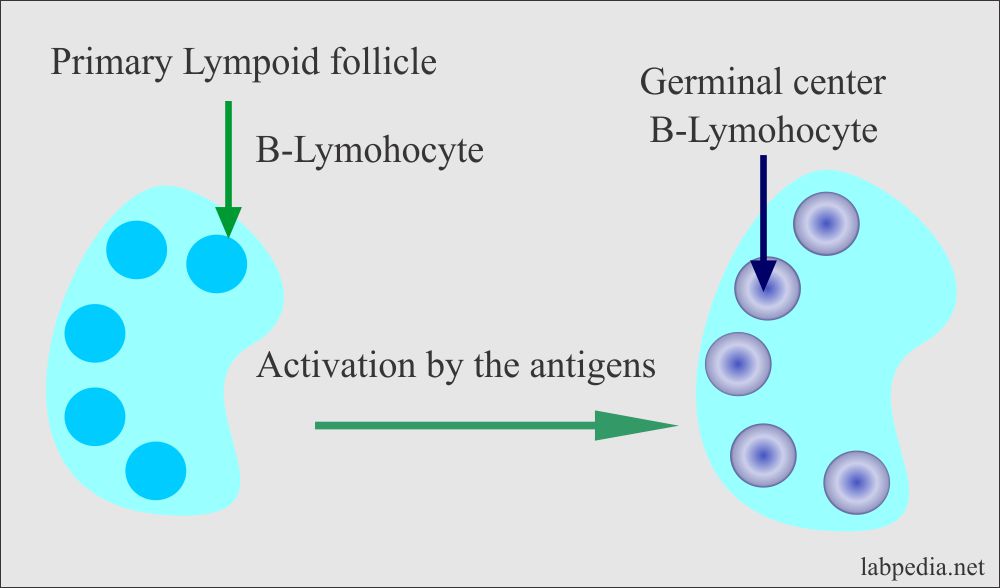 Names at Various Stages of Development of B- Lymphocytes

Formation of Immunogloubolins by B-Lymphocytes

Self-Reacting B-Lymphocytes are eliminated or inactivated by contact with self-antigen during the developmental stages of maturation; this process occurs in the bone marrow by immature B-L elaborated in the diagram below where self reacting antigens are either deleted or made anergic. 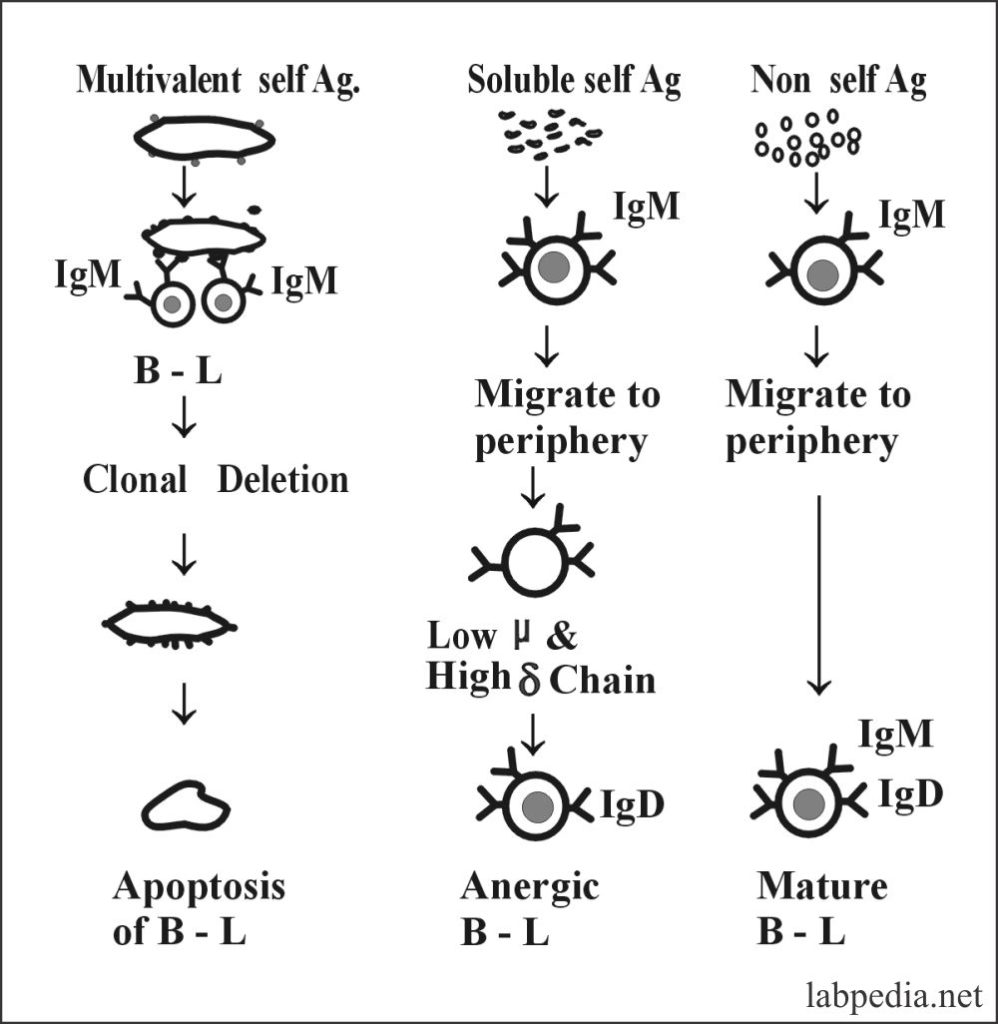 Where the antigen directly stimulates B-lymphocytes, one can say that these antigens are T-L  cell Independent.  Mostly the antigens are lipopolysaccharides or antigens with multiple antigenic sites that cross-link the surface immunoglobulin. 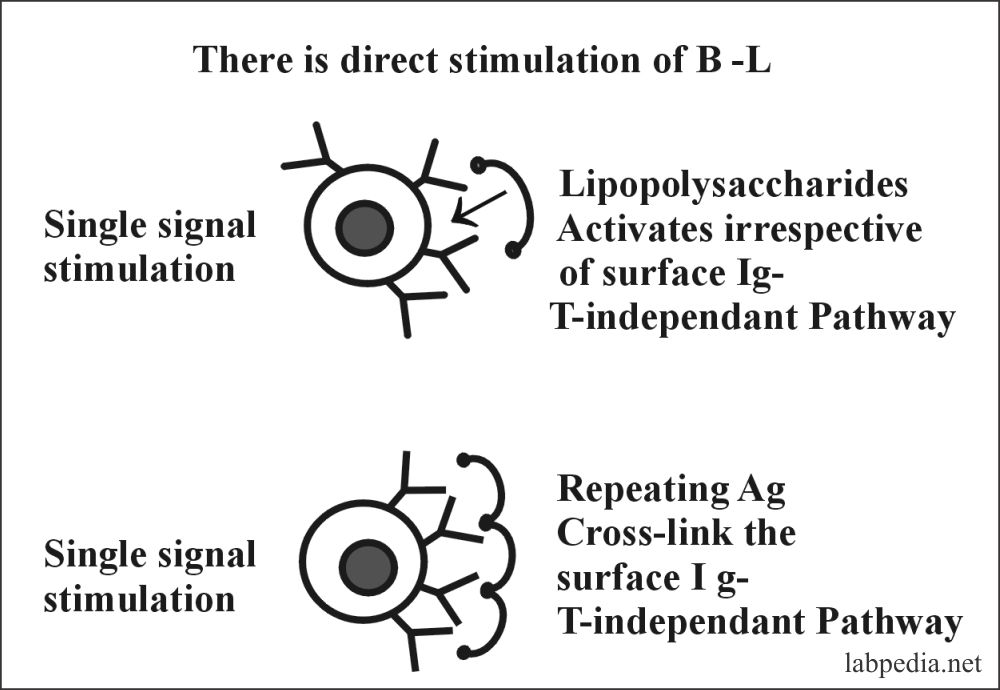 In this case, B-Lymphocytes need help from the T-L cell, so one can say that there are antigens, T-cell dependants. 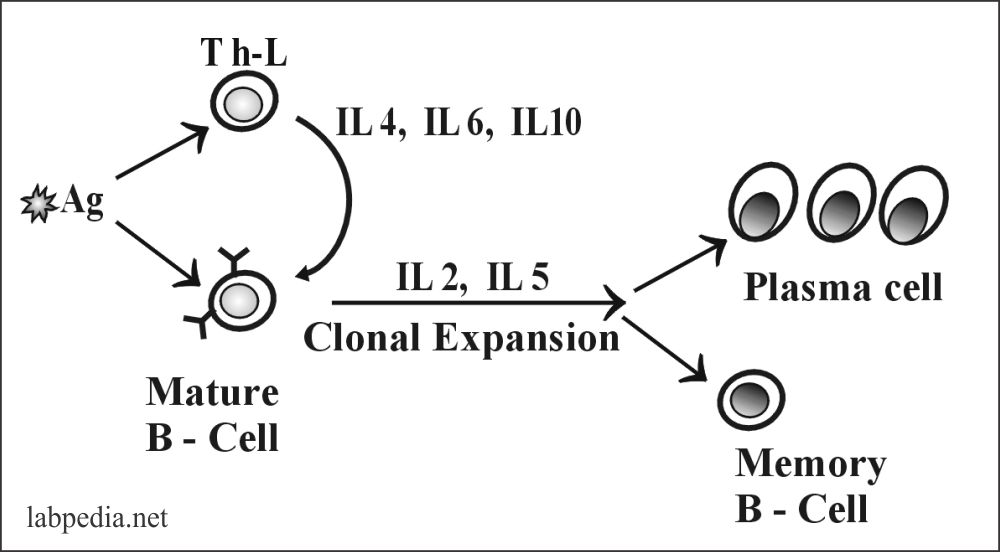 First, antigens are processed by APC (or B-L, which acts as APC), then presented to T-L (CD 4+), where TCR recognizes antigen along with MHC II molecule and which will send signals to B-L, this will be activated and transform into plasma cells and memory cells. 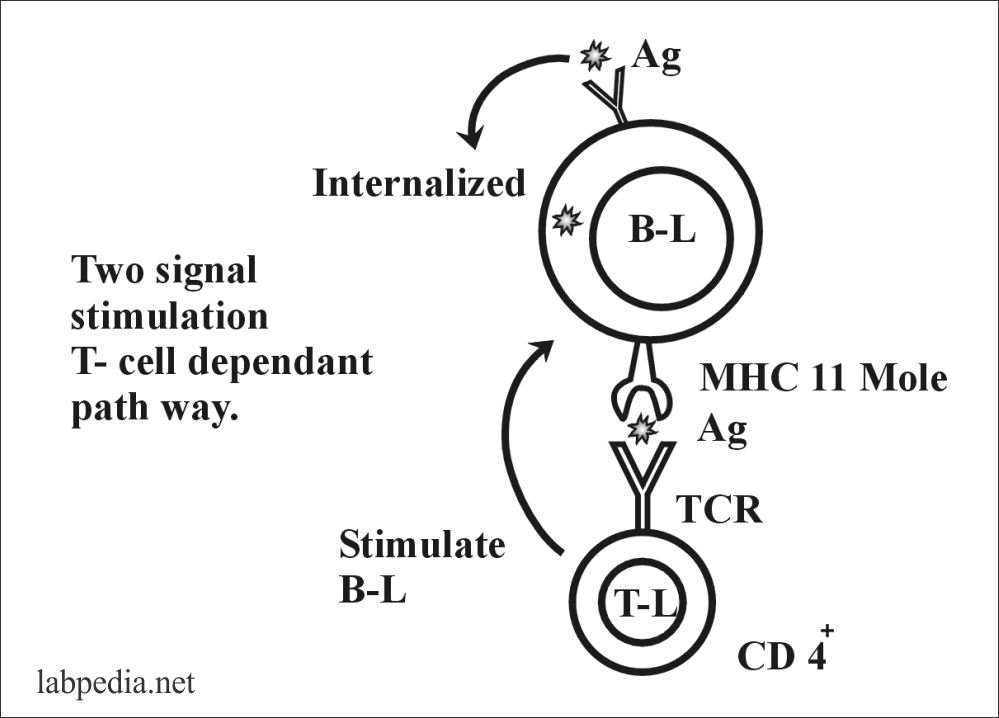 IL-4 is the main B-L activator, and also it stimulates B-L growth, and IL-5 is to some degree. IL 2 promotes clonal expansion. IL-6 is a B-L growth factor that also enhances the switching of IgG production.

When an antigen activates B-L, the first primary immune response is IgM formation after a lag period of 5-10 days.

Primary Immune Response: The IgM-Ab formation is followed after 2-3 days by IgG formation

Secondary Immune Response: When the same antigen rechallenges B-lymphocyte, then primed memory cells are activated, and there is a quicker process (3-5 days) that produce IgG in much greater quantities.

It has two major roles.

60 to 80% of the circulating lymphocytes are T-lymphocytes derived from the thymocytes that mature in the thymus glands under the influence of thymic hormones. These cells are responsible for the cellular immune response and regulation of the antibody reaction by activating or suppressing B-lymphocytes’ activation.

These T-lymphocytes play an important role in:

The T-lymphocytes develop from the bone marrow stem cell, then these are selected and educated in the thymus gland, from there they enter peripheral blood with specific functions.

T-lymphocytes are seen in the following area: 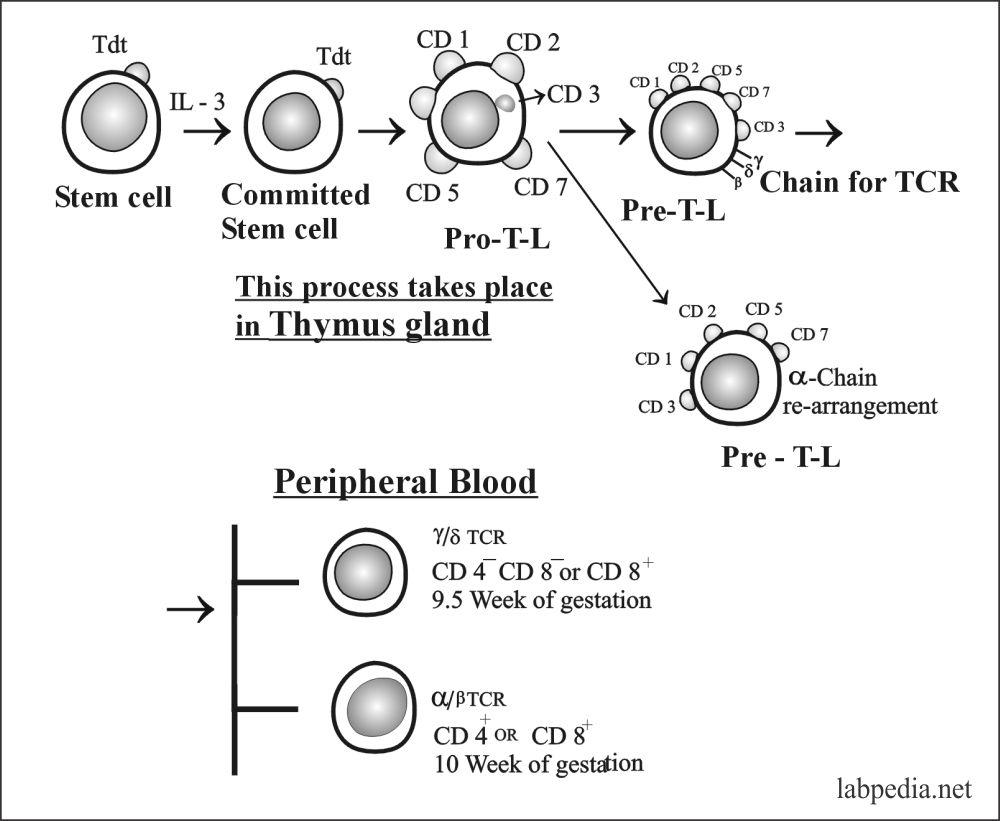 Role of Thymus Gland in Selection & Education of T-Lymphocyte

The Thymus Gland is the site for selecting and educating the T-lymphocytes (CD4+ and CD8+ cells).  It performs the following selection:

A. Positive selection – Recognition of self-MHC.

B. Negative selection – There is the clonal deletion of all self-reactive T-L.

Most T-L development takes place in the cortex. Only single positive thymocytes are seen in the medulla. Lymphocytes enter thymus glands as double negative cells. Then in the thymus glands as thymocytes, differentiate into double-positive cells with a low level of TCR. Then (CD4+ CD8+) cells enter the thymus cortex and undergo a positive selection for self-MHC restriction and start to lose one of the two co-receptor molecules. 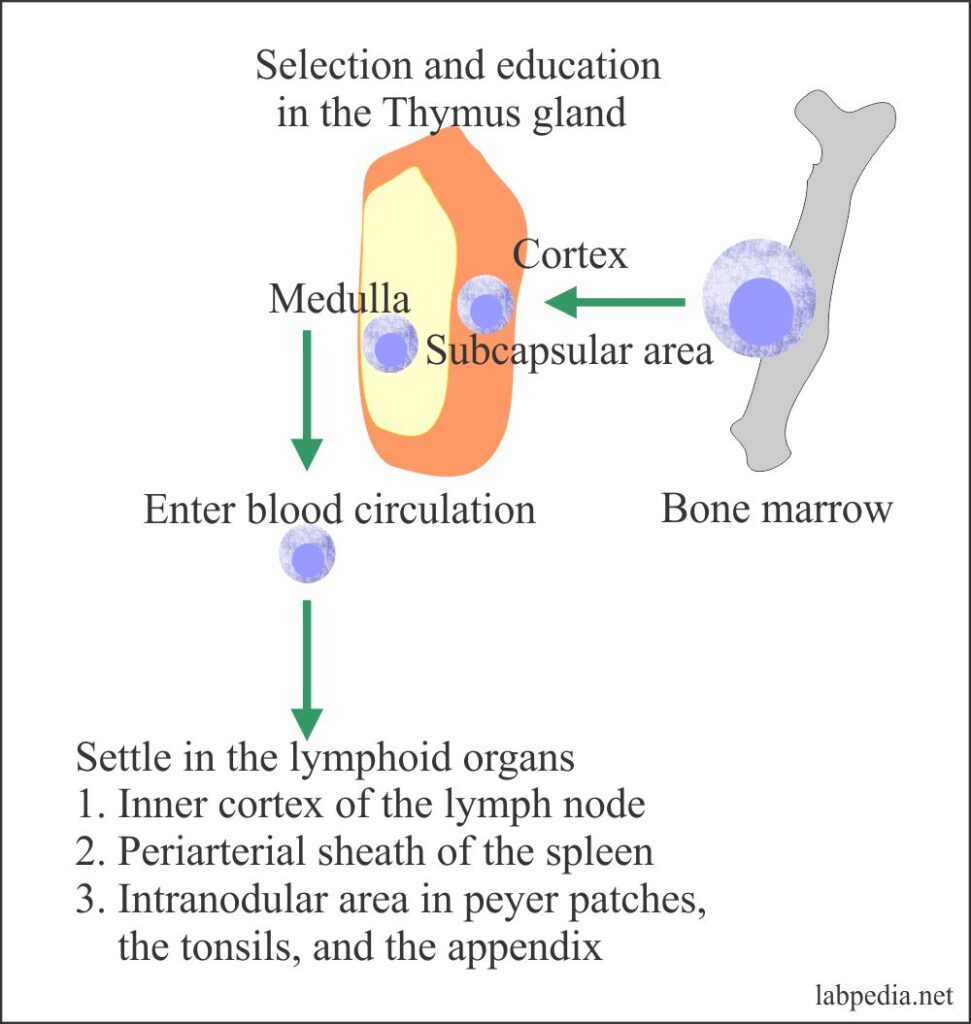 When lymphocytes leave the thymus glands are either CD4+ or CD8+ cells.

The self reacting lymphocytes are generally deleted during the maturation process.

Later on, there is an involution of the thymus glands, and 95% of the gland mass is lost during the first 50 years of age. 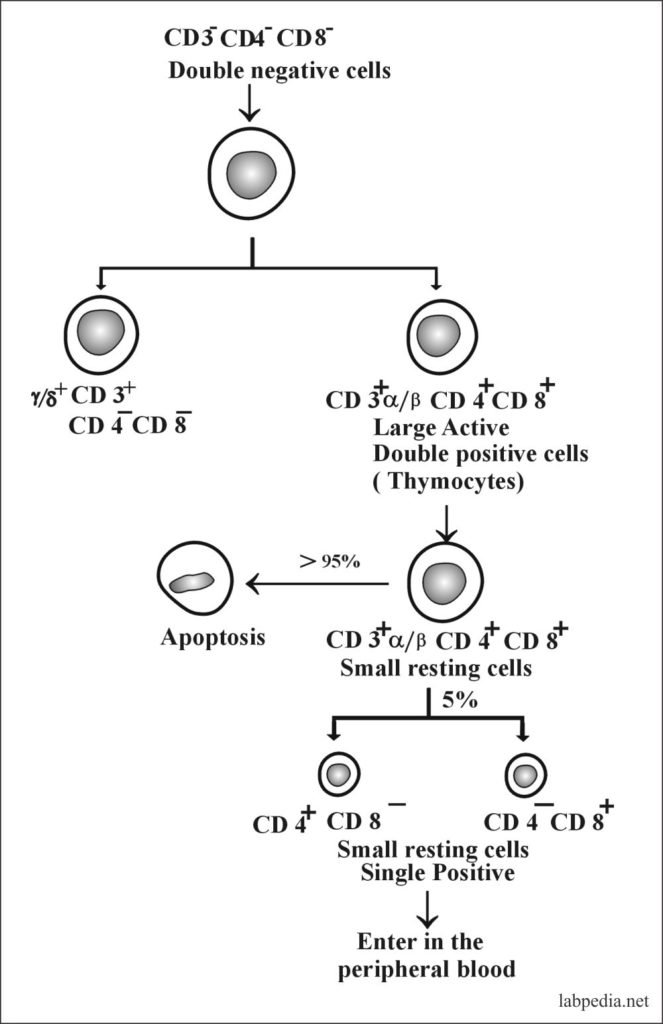 Fig 54: Selection of T-Lymphocytes in the Thymus 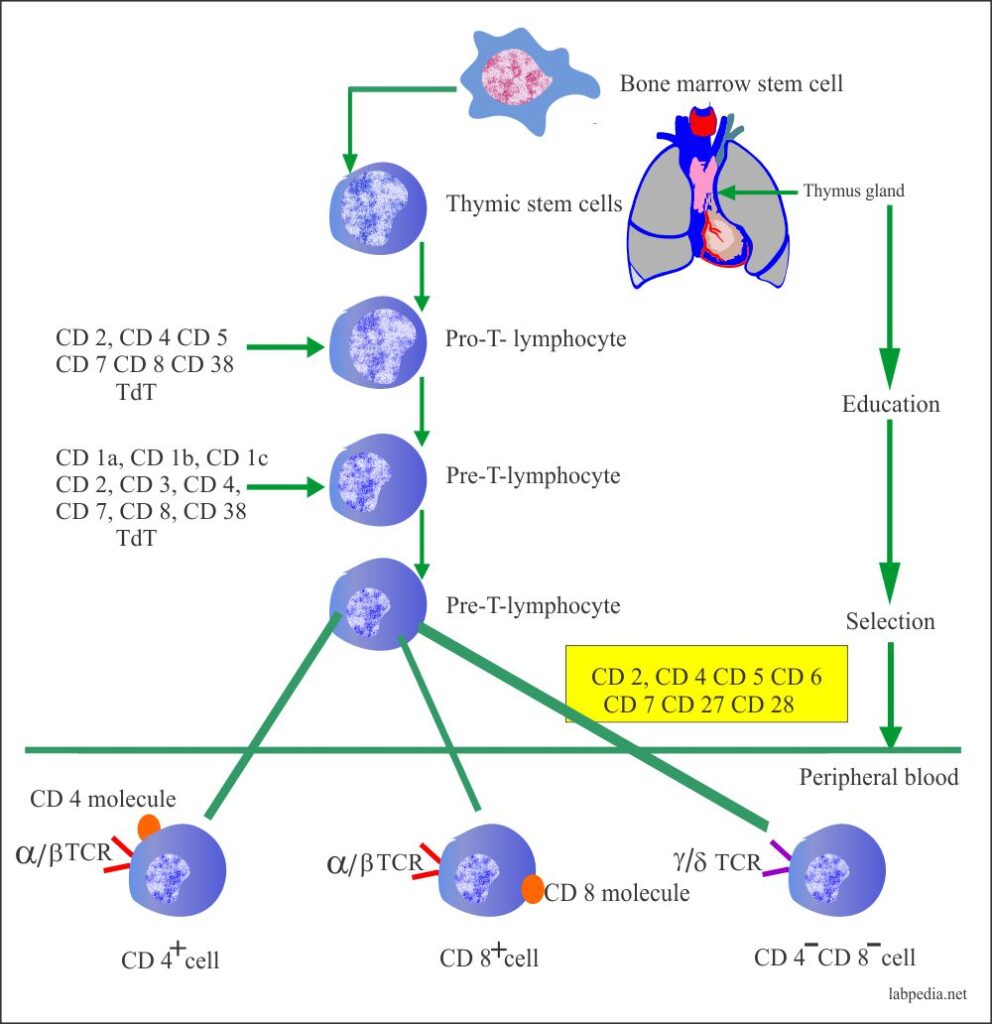 Summary of T-lymphocyte development and the role of Thymus

The following table shows the various T-Lymphocytes and their characteristics.

The subpopulation of Th-Cell (CD4+)

A. Th1: Th1 cells are called inflammatory cells that synthesize and secrete IL-2 and g-interferon. Their main role is in Cell-Mediated Immunity (CMI). It activates macrophagic and Tc cells.

TCR was identified in the mid-1980s. The genomic organization of TCR is just like immunoglobulin family genes.

TCR consists of α- chain with a 50,000, and β-chain with a molecular weight of 40,000 with variable portion and constant portion, these are linked by disulfide bonds. 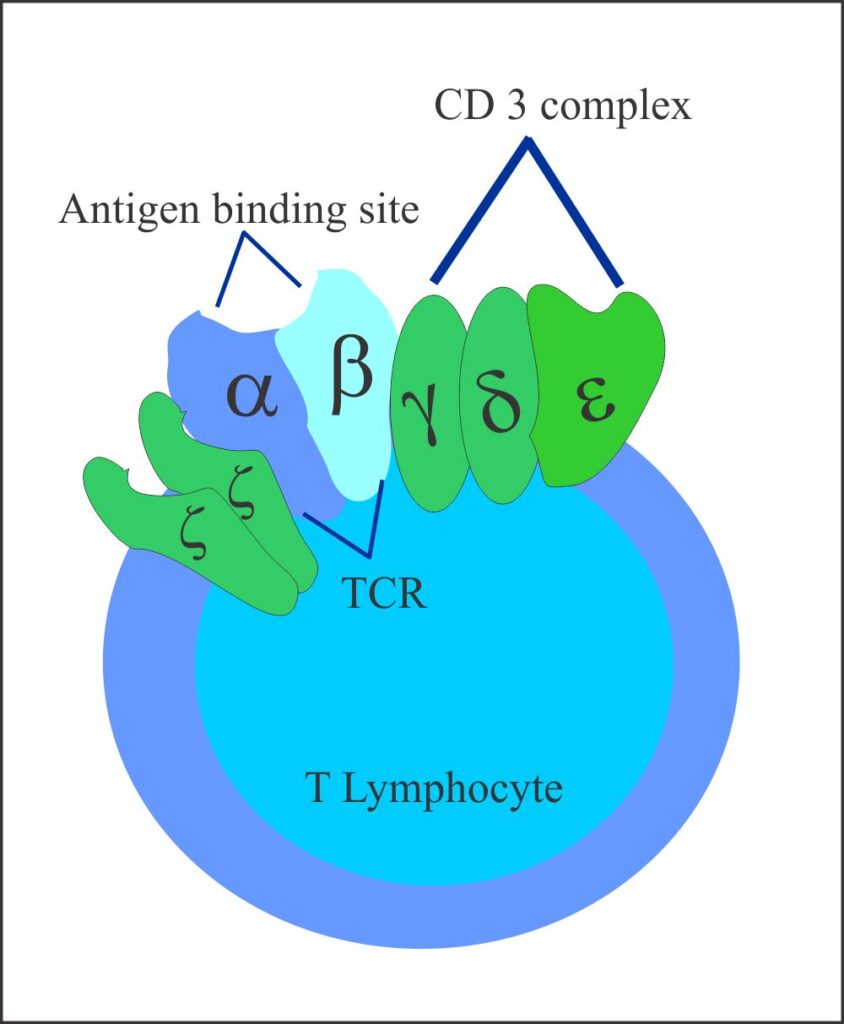 Role of B7 Family of Co-Stimulatory Molecules

T-cell is activated by the interaction of TCR with presenting Ag (MHC molecule), and there is a second co-stimulatory signal from B7-2—CD28 interaction, that is, on a signal. B7 family is present on APC co-stimulatory molecules CD28/CTLA-4 present on T-cell and their counterpart and B7 family present on APC. B7 group has two main molecules, B7-1 and B7-2. So both CTLA-4 and B7-1 molecules interaction is off-signal. Or, during activation, CTLA-4 (Cytotoxic T-Lymphocytes) is induced, and it is binding to B7-1—CLTA-4 on APC is an off-signal. 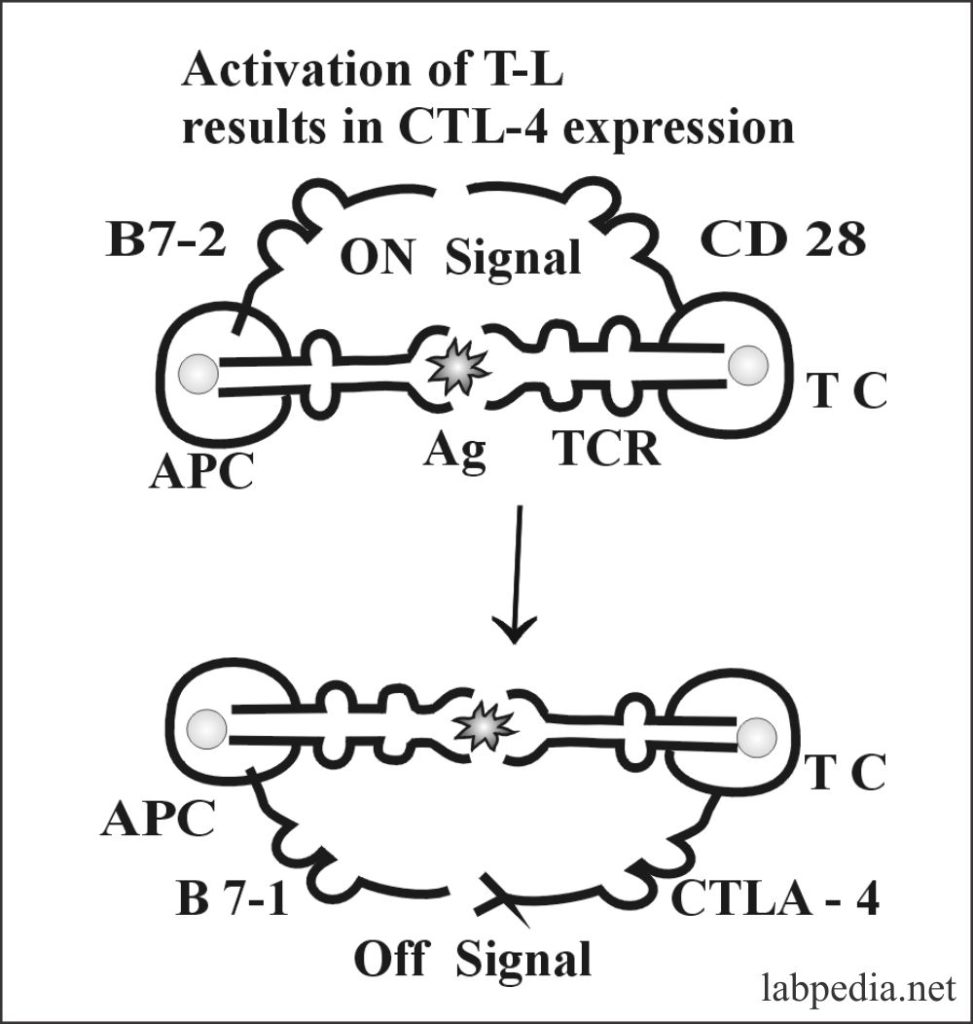 B and T lymphocytes are identical by light microscope and E/M appearances. The difference is due to the presence of surface proteins.

All T-Lymphocytes that express TCR also express the CD3 complex. It is termed as “Pan T-cell marker.” The main function of the CD3 complex is the transduction of signals coming from TCR to initiate cell activation. 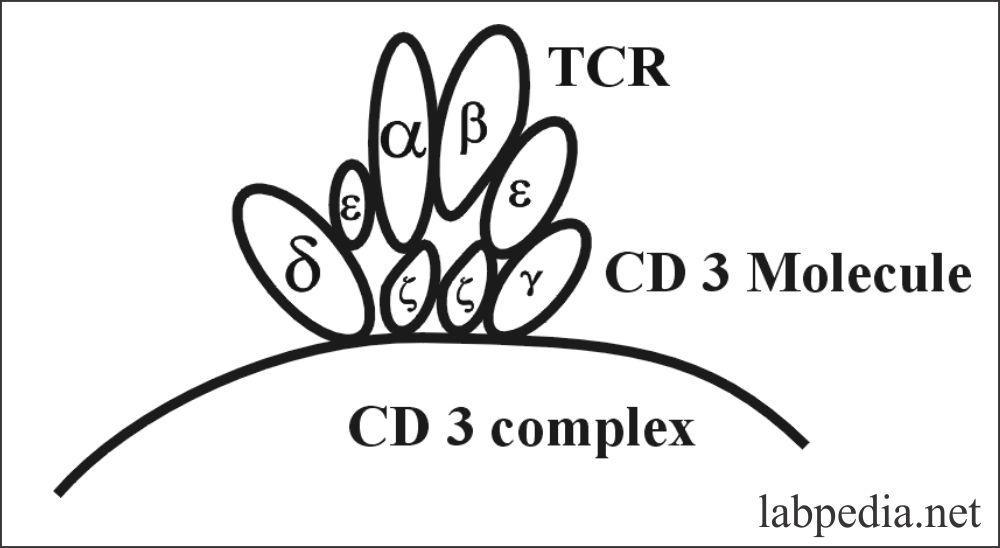 This is membrane glycoprotein with a molecular weight of 55 Kd. It is expressed as a monomer and is a member of the Ig-supergene family. It provides some adhesive forces between interacting cells and provides necessary activation signals. 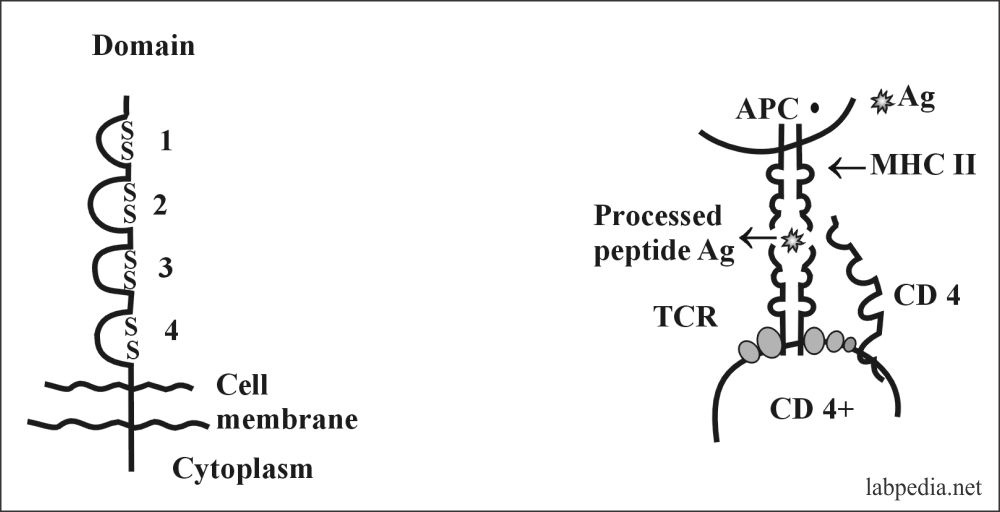 CD4 molecule has a specific affinity for the MHC-II molecule.  It acts as an adhesion molecule for MHC-II.

CD 8 molecule is a disulfide bond linked dimmer. It consists of α-chain (32Kda) and β-chain (34Kda). Each has an Ig-like domain. There is a groove for processed Ag, which is presented along with MHC –class 1 molecule. 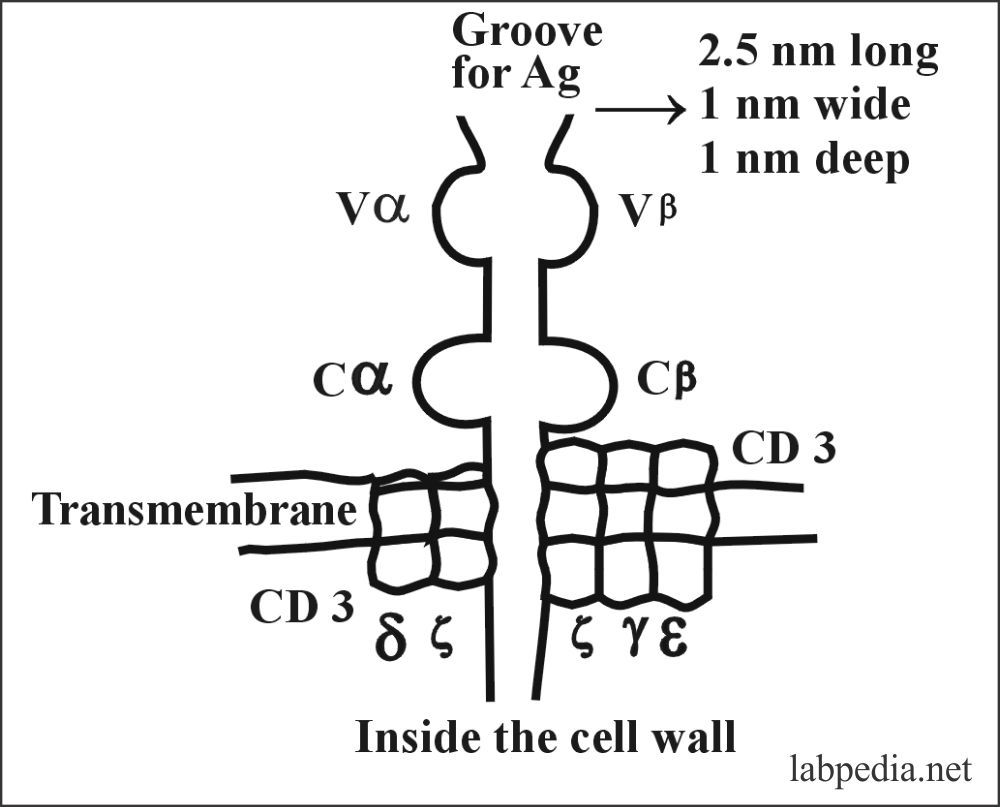 Fig 63: Structure of the CD 8 molecule

It acts like CD4 as an adhesion molecule and binds to the MHC-I molecule with processed antigen.

Differences between B and T-Lymphocytes:

Table IX – Differences between B and T-Lymphocytes

These are mature, actively antibody-producing cells. These are derived from activated B-lymphocytes into immunoblast and then transform into plasma cells.

Markers of Plasma Cells are:

Structure of Plasma Cells: The Plasma cells are round to oval in shape, and the nucleus is eccentric. Its chromatin is cartwheel in appearance. Isotype switching and splicing yields and secretes  γ,  α, ε mRNA

No characteristics of B or T-cell. The majority possesses FcγR, so maybe killer cells in ADCC.

Now, these are basically the Nk cells.

These are the type of immune cells that enable the T-L to recognize the antigen and gives the immune response against the antigen; these are called antigen-presenting cells (APC). The APC  are:

APCs are of two types:

Looking a bit in this immunology textbook, and noticed that high up in chapter 8 you have a table showing in which organs you find the cell types. For the thymus it says that B-cells constitute 100 % of the cells there, but it should be T-cells. Probably an error in constructing the table.

Thanks for a great site!

It is corrected. Thanks for your comments.

Dear Pontus
I am really thankful for your comment.