The increased SGPT level is seen in: 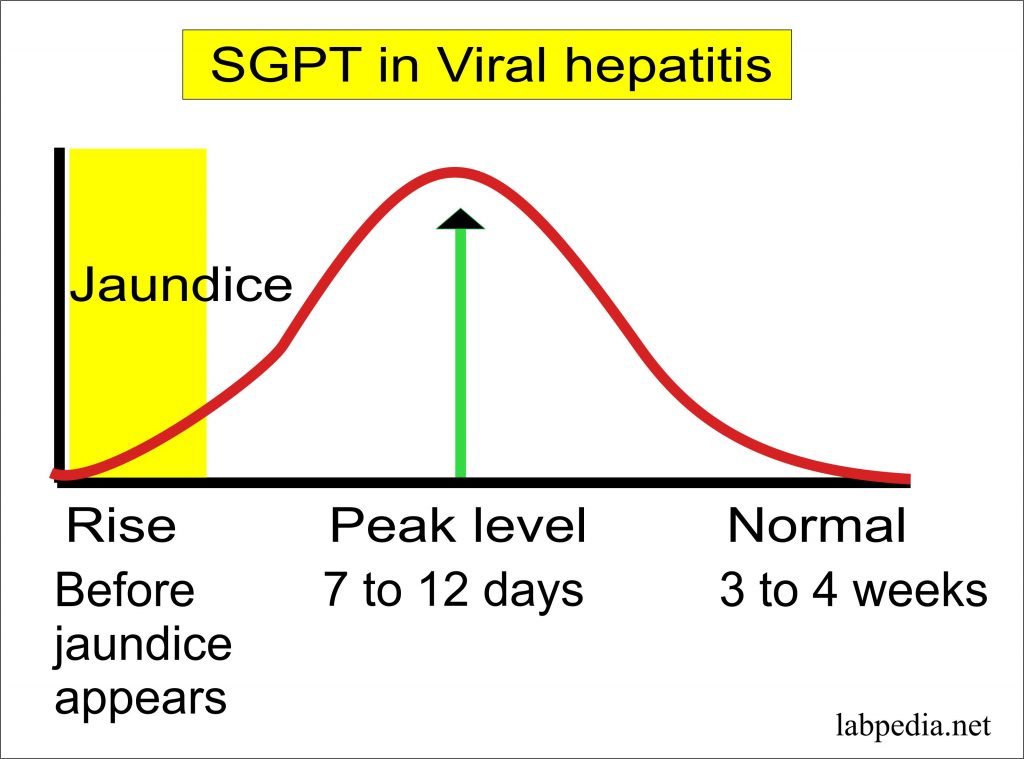 SGPT level in the Viral Hepatitis

Table showing the increase of SGPT in various conditions:

Critical value = >9000 U/L  seen in Alcohol-acetaminophen syndrome.
This level can distinguish from alcoholic or viral hepatitis.

You should have a complete Liver function test and viral hepatitis profile. Keep on checking SGPT and SGOT at least every three months.

Dear
This SGPT is raised. Please advise complete liver function test with viral profile HBV, HCV. Then best is to consult some good hepatologist or physician.

You should have a complete liver function test and hepatitis profile (HBV, and HCV). If these are abnormal then consult the physician.

Good day,
my sgpt is 56 U/L
my sgot is 59 U/L
I’m 34 y/o male. had muscle pain a few days ago due to my new squat exercise routine before taking this test. Is my muscle pain connected with my sgpt sgot levels? should i be worried? thank you

Dear SGOT/SGPT are raised. You should have total bilirubin, direct and indirect, alkaline phosphatase, and gamma GT level. If these are raised then please consult physician for further work-up.

Sure it is normal.

Hi i am 24 year old female i have SGOT 52and SGPT 81.5 what should i do. Else every thing in my liver and blood profile is normal.

Please check your hepatitis viral profile. Please rule out any medication. Even aspirin can disturb the LFT.

i m covid patient and my SGPT is 101. and CRP lavel is 0.6 so please suggest what to do

Please advise complete liver function tests to find any other abnormal values. You definitely need treatment for the Covid. Now, a day’s most doctors are prescribing steroids. Please consult some good physicians.

It is the upper limit. Please advise the complete liver function test.

SGOT is normal, but SGPT is mildly raised which may be due to some medicine like Aspirin. Please repeat after 2 weeks.

Mostly your tests are in the normal range. I don’t think so. If you have any symptoms then consult a physician and do the tests which he/she thinks are needed.

MY SGPT is 28 U/L and (HBV) DNA is Undetected. What kind of prevention should taken by me . I am just 35

Vaccination for HBV infection is available. I will suggest you get vaccinated.

Hi Dr. Riaz, I am diabetic patient and a stone in my gallbladder with no pain, four months ago SGPT result was 44 U/L , recent test result SGPT is 66 U/L. my age is 41.

Most tests are normal except for SGOT and SGPT. Please rule out alcohol intake and pain killers.

Is their any thing serious ?

I can say this is raised. You should do a complete liver function test. I will suggest repeating your test after 2 to 3 months.