Indications in various organs for the transplantation according to their demands:

History of the organ  transplantation:

Data of the tissue transplantation:

Graft Survival in the USA 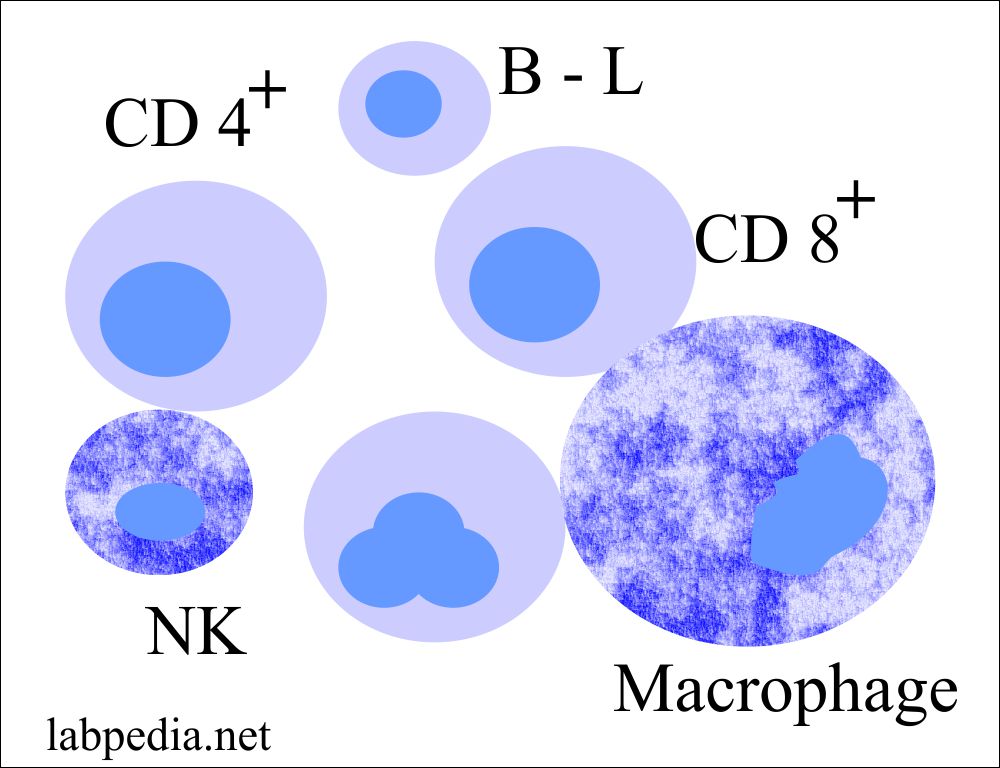 The cellular infiltrates in the graft.

There are three clinical observations for the rejection of transplantation:

Medawar experiment for the Rejection phenomenon:

First-set rejection: When mice B grafted first time from mice A, then graft is rejected slowly, 10-14 days and this is called first set rejection.

Second-set rejection: When mice are regrafted from the same donor, then graft is rejected more rapidly (6-8 days) and is called Second set rejection.

Even if lymphocytes from Mice B, when transfused to mice C, show second set rejection. But when graft from mice A  is put on Mice C again, there is First set rejection.

The basic principle involved in the transplantation:

The recognition of the foreignness of any substance, external or internal, gives rise to the same sequence of the reaction as we have seen in the immune response. So in tissue transplantation, both humoral and cellular mechanisms of immunity are activated.

The basic goal of the transplantation is the long survival of the graft. This will depend upon the donor’s similarities and the recipient’s genetic (antigenic similarity) structure.

Some of these antigens provoke an immune response and are called major histocompatibility complex (MHC).

In humans, MHC is called human leukocyte antigen (HLA). This is controlled by MHC or supergene, which includes several loci closely linked on the short arm of chromosome 6. 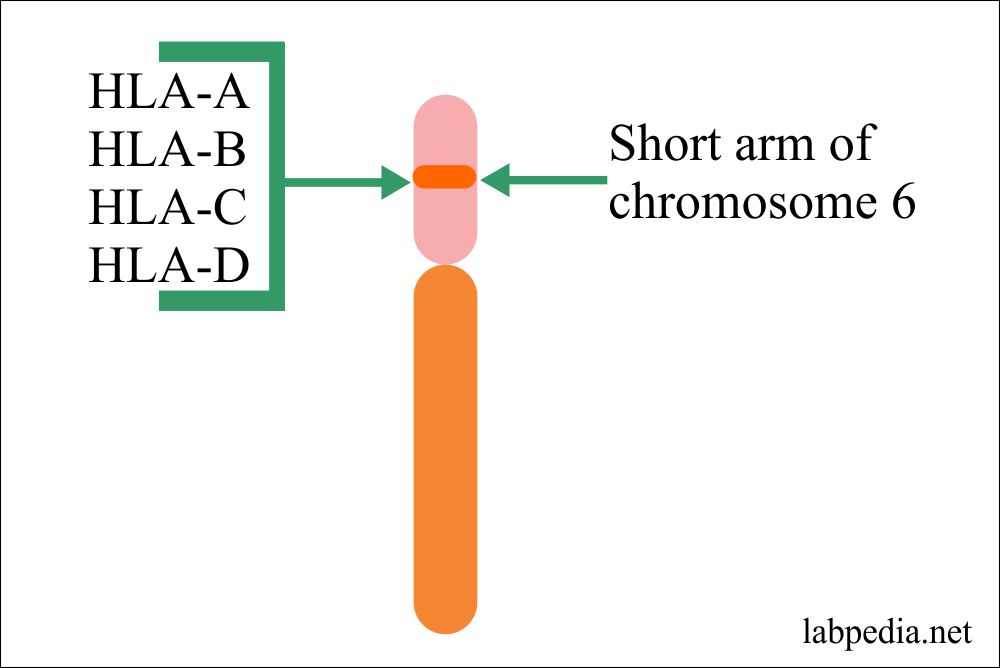 The role of the HLA system in the transplantation:

In this case, the foreign MHC molecules can directly stimulate the T- lymphocytes. These T-lymphocytes respond against foreign proteins, which are process into peptides and presented on the surface of the recipient’s APC in association with MHC molecules.

Both MHC class, I and II molecules, are the T-L target that regulates the immune response.

Distribution of the HLA- class I and II molecules on different cells of the body:

The comparison of HLA, ABO blood group, and Rh-system needed in the transplantation:

The role of T – lymphocytes in Rejection of the graft:

The role of  the B – lymphocytes in rejection:

There is a main role of T-lymphocytes, but B-lymphocytes can also mediate rejection, and the possibilities are:

A. Presence of preformed Antibody:

B. Formation of Antibody:

Exposure of HLA-I & II Ag of donors by the recipient give rise to Ab formation, and these may cause damage by:-

The initial target is graft vasculature, and some referred to this as rejection vasculitis.

Criteria for the success of  Transplantation:

Morphological Classification of the rejection:

This rejection occurs within minutes to hours, so it is recognized by the surgeon at the table, particularly in a kidney transplant.

The kidney will be cyanotic, mottled, and flaccid.

Few drops of urine will form, and these may be bloody. 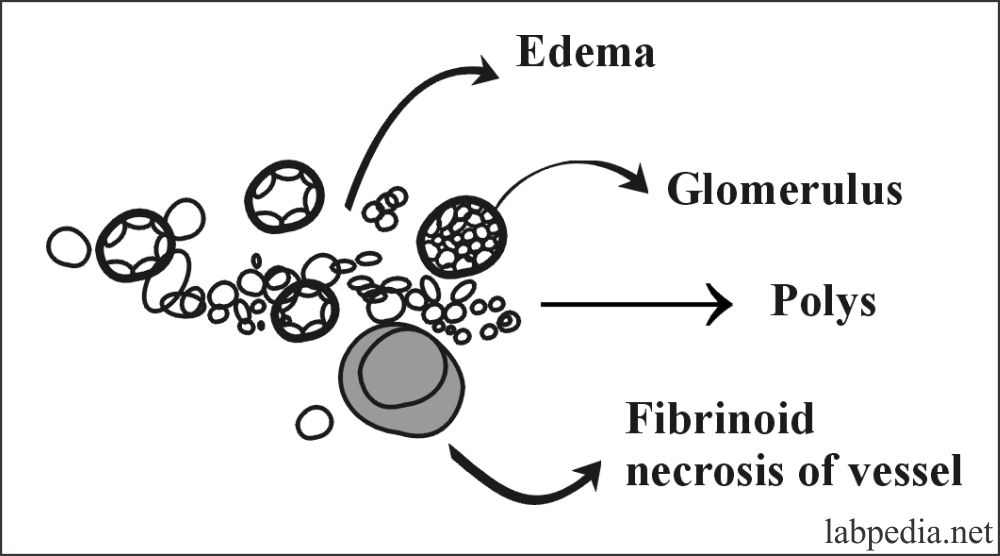 The kidney cortex undergoes infarction, then necrosis, and the result is the non-functioning kidney.

Acute Rejection can occur within a day or suddenly, in months or years, accompanied by renal failure signs and symptoms.

This is cell-mediated due to T-L. It occurs in the initial months, and the patient develops abrupt signs/symptoms of renal failure.

There is edema; mononuclear cellular infiltrates of T-L (CD4+,  CD8+, and macrophages). There may be mild hemorrhage and focal tubular necrosis. But there is no evidence of vasculitis.

This acute cellular rejection can be treated by giving cyclosporin, and there will be a prompt response.

This occurs in the first ten months or when immunosuppressive therapy is stopped.

There is predominantly necrotizing vasculitis.

There is an infiltration of neutrophils and the formation of fibrin thrombi. There is necrosis of glomeruli and cortical arterial thrombosis. The presence of Immunoglobulin and complement can be demonstrated. 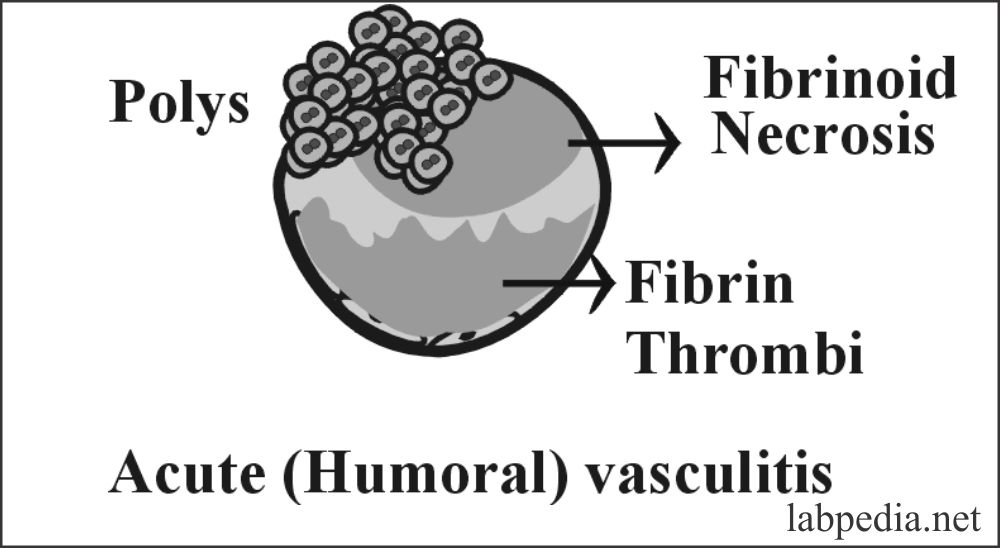 There is no response to increasing doses of immunosuppressive therapy. This is the reason that on biopsy, this should be separated and diagnosed.

This also occurs in the first few months, and this is a common condition.

The patient will have altered renal function suggesting an episode of rejection.

Types of graft reaction, their duration, and etiology:

Transplantation of the various organs:

Bone marrow transplantation is done in:

Bone marrow transplant is the second most common transplantation.

The donor may be autograft or allograft. A donor is a living person, and the sample may be obtained by needle aspiration.

Before marrow is transplanted from the donor and the recipient is radiated with a lethal dose to destroy malignant cells or create an aplastic condition.

A major problem of Bone Marrow transplantation and occasionally in the liver are:

This is the most common type of transplantation. It helps to save the life of so many recipients daily.

The donor may be an autograft, in which blood is taken from the patient before the surgery and, if needed, can be given to the patient.  These donors are always living.

Most donors are allografts. Blood from identical twins can also be used.

Indications for the blood transfusions are:

The blood transfusion is always successful when a proper crossmatch is done.

A kidney transplant is the most common procedure.

In this case, the kidney can be gotten from the living donor, where one kidney will compensate for one kidney’s loss.

In this case, the graft is an allograft. The donor may be living or cadaveric.

These patients are put on the immunosuppressive therapy, and that will prolong the life.

The first successful transplant was done in South Africa in 1967. In the USA this was done in 1981.

The donors are allografts, and these are mostly cadaveric; these are the patient with brain dead.

Heart transplantation is indicated in:

These patients are treated with immunosuppressive therapy. Initial survival for one year was 20%. Now it has increased to 85 to 90%. At the same time, 5-year survival is 75 to 80%.

Xenogenic valve replacement is the standard procedure for aortic and mitral valve defects.

These valves’ source is bovine (cow) or porcine (pig); these valves are chemically or physically modified to reduce the antigenicity.

Patients who get these modified xenogenic valves do not get immunosuppressive therapy because the rejection is minimal or non-existent.

The source of the skin is autograft or allograft. But mostly, the donors are self (autograft). The donors are living source.

The skin allografts will show the rejection phenomenon because of the extremely high density of the MHC class I molecule antigens. These allografts are supported by immunosuppressive therapy.

This grafting or transplantation is done in burn cases. This is done to control the infection and get a normal skin look.

The graft from the self and identical twins is very successful. In the case of allograft, immunosuppressive therapy is needed.

The donors are living where part of the liver is taken. The cadaveric liver can also be transplanted. This was very common in China, where the liver was provided by the criminals who were undergoing a death sentence.

Potential liver transplant patients should not have extrahepatic disease or infection.

Liver transplantation is done in:

Liver cells can regenerate. So part of the liver can be transplanted, and the remaining liver will regenerate. The liver from one donor can be split and transplanted to two patients.

This procedure’s major complication is biliary tract fistula or leak, which may be seen in 30% to 50% of the patients.

One of the liver transplantation complications is graft-versus-host disease.

The lung transplant is difficult because of technical and immunological problems. The donor and the recipient bronchi should be of the same caliber. Lungs are susceptible to ischemic damage.

then only the lung.

This is usually done in patients with:

The graft is allograft or from an identical twin. The donors are brain dead patients.

Lung infection and sepsis are widespread in donors.

Immunosuppressive therapy is needed. The lung transplant prolongs the life of the patient.

Many lung recipient patients died due to massive infection and sepsis.

This usually by autograft of the living donor.

The hairs are taken from the lower back part of the head (occipital area).

This is advised in a bald area of the head. This is mostly a successful autograft.

Cornea lake the blood vessels, so there is a reasonably low concentration of the MHC class I molecule (antigens). Almost nearly in the absence of MHC class II molecules (antigens), graft rejection is minimal. These grafts are made small and avoid making contact with the vascular area.

This is also known as keratoplasty. This is allograft or graft from the identical twins.

Mostly the cornea is taken from the cadaver.

The indication for the cornea transplant are:

Immunosuppressive therapy is not needed. There is a complete visual recovery because the cornea is an avascular structure. Only in 20% of the cases rejection is seen.

There may be full pancreatic tissue or only islet cell transplantation.

The pancreas as a whole transplant is not successful. While islet cells transplant into retroperitoneal tissue has a success rate.

GVHD may be due to blood transfusion or transplantation in severely immunocompromised or immunosuppressed patients.

The degree of immunodeficiency in the host, the number of transfused immunocompetent lymphocytes determine whether or not GVHD will occur. 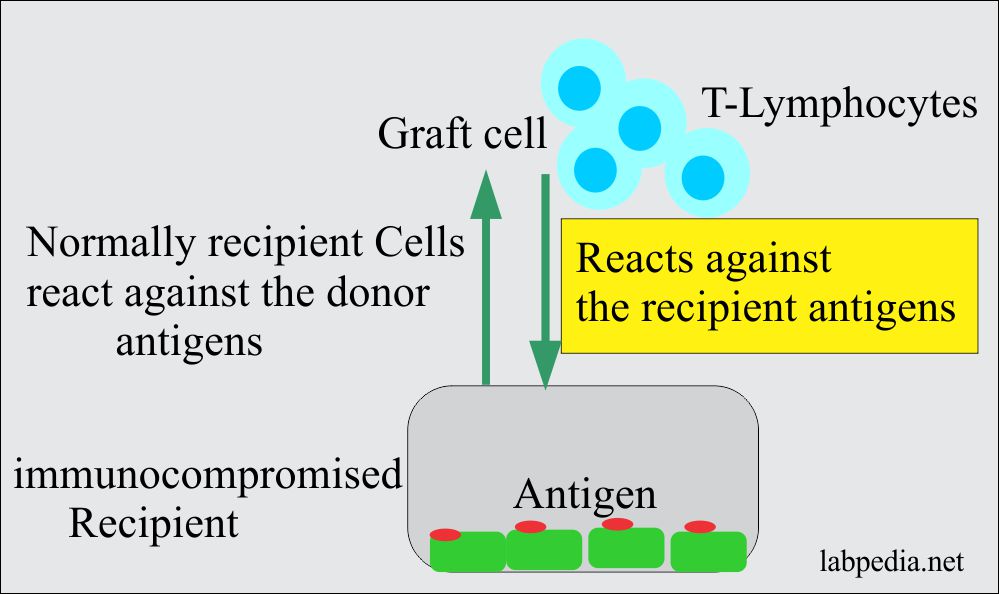 In this case, the recipient can not reject the transfused lymphocytes; the grafted lymphocytes may destroy the host tissues and eventually death. The greater the antigenic difference, the more severe reaction will be seen.

GVHD is seen in:

Classification of the graft versus host disease (GVHD):

Graft versus Host disease is of two types:

It occurs in the first 1-2 months after transplantation (first 100 days).

Any organ may be involved, and the main problem is the immune system’s involvement and epithelium of skin, liver, and intestine.

It appears after at least 2-3 months after transplantation.

If donor T lymphocytes from bone marrow are depleted, then GVHD will be prevented.